Since 1985, Retrieve a Golden of the Midwest (RAGOM) has rescued and re-homed more than 9,000 Golden Retrievers and Golden mixes throughout Minnesota, North Dakota, South Dakota, Iowa, and Western Wisconsin.

Every RAGOM dog receives medical attention. Many arrive healthy and require only a wellness check and vaccinations. But others require extensive testing, medications, and/or surgeries, including dogs like Nelly 18-013A. 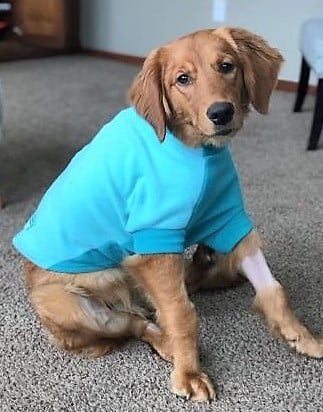 When Nelly was rescued from a commercial breeding auction, we noticed her enlarged belly and assumed she was pregnant. We learned instead that her abdomen was full of fluid due to right-sided heart failure. Her heart was racing at 300 beats per minute, and she was lucky to be alive.

Although she was just 7 1/2 months old, Nelly’s heart required an ablation procedure. While not very invasive, the procedure is expensive. Thanks to generous RAGOM supporters, Nelly received the life-saving surgery and is now a healthy and happy young dog.

RAGOM’s adoption fee is far less than the medical expenses a dog incurs. We rely on the generosity of our sponsors and donors to help cover these and other costs.

Goldzilla is RAGOM’s largest annual fundraising event and appeals to all dog lovers, including many RAGOM adoptive families. Goldzilla is one of the biggest Golden Retriever events in the country—more than 1,200 people and 600 dogs attended in 2016, and our numbers grow every year!

Your Goldzilla sponsorship, silent auction donation, or volunteer group participation will provide great exposure to thousands of RAGOM fans and followers, Goldzilla attendees, and the greater Twin Cities metro area. TV appearances, pre-event promotions, and both digital and traditional advertising will ensure that your sponsorship reaches dog lovers across the Midwest and especially in the Minneapolis-St. Paul designated market area (DMA) with both paid and earned media.

Your opportunity to shine

Goldzilla sponsors benefit from media and online exposure, as well as recognition before, during, and after the event. With multiple sponsorship options, it’s easy to choose the sponsorship level that fits your marketing strategy and budget.